Buying a Florida Keys Home With Resale Value Location – Research local Florida Keys Communities, Towns or Cities before you actually pick out a house. There are many factors you should pay attention to, not only for yourself, but because you intend to eventually sell the home to someone else. Carefully choosing your Florida Keys community is the first step in "location, location, location" and can help maximize your future potential Florida Keys Property resale value. Economic Stability. When choosing a community for your purchase, it makes the most sense to buy in a property location with a viable and stable economy. Five, ten, or even fifteen years from now – when you want to sell your Keys home you can have a reasonable expectation that your community will still be a desirable place to live. In addition to residential neighborhoods, there should be a healthy mixture of commercial and Florida Keys business districts. These not only provide jobs to the local residents, but also add an income source that the property location can use to upgrade and maintain roads and city services. In fact, you should take a drive and see how well the community is maintained. You have probably heard of "pride of ownership" when referring to an individual home or an automobile. Look to live in a location that demonstrates community pride, as well. Local Government Services in addition to community pride, check on the services provided by local government. One should also look into local crime statistics and see how the city compares to the national average and other local communities. Is the police force effective and responsive to community needs? Are fire stations located strategically around the Florida Keys community so that they also can respond quickly in an emergency? Another area of inquiry is community services. Does the city sponsor youth sports and have well maintained athletic facilities and parks? Do they sponsor community events, such as an annual parade? Are there activities available for children, teenagers and senior citizens? Your local Real Estate agent, if they are a good one, will have amassed a wealth of information on these subjects of inquiry. It is also another reason to always use a local agent.

Key Largo is connected to the mainland in Miami-Dade County by two routes. The Overseas Highway, which is U.S. Highway 1, enters Key Largo at Jewfish Creek near the middle of the island and turns southwest. Card Sound Road connects to the northern part of Key Largo at Card Sound Bridge and runs eastward to connect with County Road 905, which runs southwest and joins U.S. 1 at about mile marker 106. These routes originate at Florida City on the mainland. Key Largo is a popular tourist destination and calls itself the "Diving Capital of the World" because the living coral reef a few miles offshore attracts thousands of scuba divers and sport fishing enthusiasts. Key Largo's proximity to the Everglades also makes it a premier destination for a Florida keys Fishing Vacation including kayakers and eco tourists.

Islamorada, a "Village of Islands," is an incorporated village in Monroe County, Florida, United States. It is located on the islands of Tea Table Key, Lower Matecumbe Key, Upper Matecumbe Key, Windley Key and Plantation Key in the Florida Keys. The village was incorporated on November 4, 1997. Prior to this date, Islamorada was only considered to be on the island of Upper Matecumbe Key. Islamorada is know for its fishing vacations because of the easy access to the Florida Bay and the Atlantic Ocean. From Bonefish to Sailfish Islamorada is a top location for a fishing vacation. 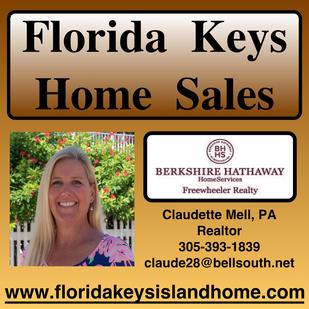